“I love nature. Experiencing deep concern about our children’s future, I also see a shift in consciousness beginning that is changing our destructive ways to healthy, symbiotic ways of living.”

Chelsea Ravensdale was born in Whitehorse, Yukon. She has traveled abroad, lived elsewhere, and loves the Yukon as her home. As a very young child, several times she woke her parents early in the morning wailing having cut herself trying to carve the soap! This could now be seen as a premonition of her future as a carver and sculptor.

Chelsea began learning pottery at the age of 5 with Lynn Sofiak; then painting with Kate Williams, Sylvia Hackney and Estace Bunker. As a teenager and into her adult life she learned leather sewing and bead work with Nicole Smith, her late grandmother Irene Smith, Lorraine Joe, and late elder Polly Fraser. She has also done post-secondary studies in color, mark and image, and multimedia.

In 1996 a roommate gave her a box of small soapstone, a paring knife and a dental pick when moving out. Experimenting and finding it very familiar she wondered “maybe I’m supposed to carve…”, though at the time she was enraptured in the art of beads and sewing. Primarily self taught, Chelsea began focused work as a carver and sculptor in 2014. Impressed by nature, animals, and communication – the difficulties and successes therein, much of these elements are reflected in her work. Chelsea’s art work has found homes all over the world. 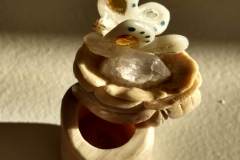 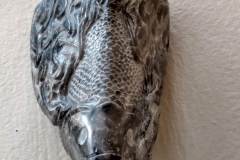 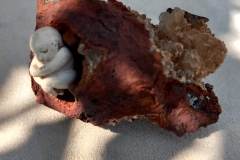