From her beginnings in southern Ontario to the Yukon home she chose, Meshell Melvin has been making art. In a professional practice that spans 28 years, her images have been drawn, printed, painted, animated, collaged, and embroidered. Hand in handle with ‘The Universal Movement Machine’, a rare industrial chain-stitch embroiderer; Meshell has been embroidering portraits of Yukon citizens. Her images reflect an interest and curiosity in the world around her: the people, the homes they live in, and the surrounding landscape.

Meshell has exhibited in solo and group exhibitions in Alaska, the Yukon and in public galleries across Canada. Her work hangs in private and public collections, and has been featured in print, on CD covers, radio, television, and in two short documentary films. The recipient of a number of awards from the British Columbia Arts Council and the Yukon Government, she is most proud to have been voted Favorite Yukon Teacher in Yukon North of Ordinary readership poll (2012). Her passion and commitment to art education in the territory parallels her devotion to her practice, and takes her on art making adventures with students from Watson Lake to Old Crow. 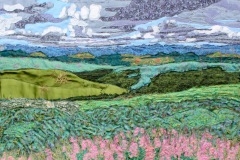 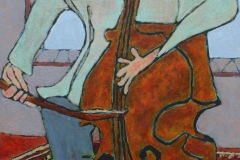 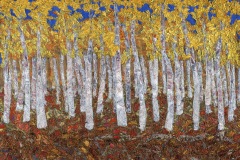